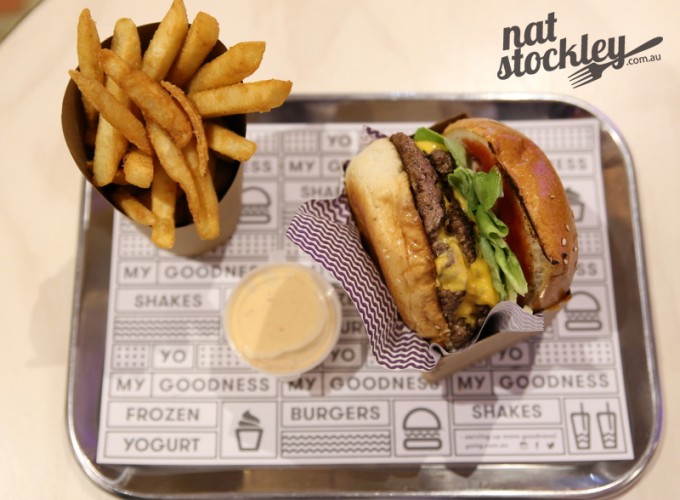 Yo My Goodness (YOMG) have established sites throughout Victoria; Mordialloc, Mornington, Mentone and Malvern. There’s also a store in Cairns which sadly doesn’t begin with the letter M. Wonder if they ever considered setting up shop in Maroochydore or Mooloolaba? I’ve noted a number of frozen yoghurt shops calling it a day of late, particularly as winter set hits.   Given the rate at which these establishments have been opening, it seemed improbable they could all survive. One of the froyo shops in my neighbourhood recently added soups and salads to the mix presumably in effort to bolster the bottom line.

When I learnt YOMG’s new Glen Waverley store would be augmenting its offerings with burgers I initially assumed this was motivated by the need to boost a struggling yoghurt business, however I later learn the decision was more about making full use of the abundant floor space at this new premises.

Venturing out to Glen Waverley, I’m not expecting much in the way of a burger, mainly as I figure burgers aren’t their core business so what’s the likelihood they’ll be offering up anything special? On entering the crowded Glen Waverley store I start to have a re-think. The substantial store is nicely fitted out & there isn’t an empty seat to be found. It’s immediately obvious they’ve spent a lot of time on branding & devising the menu. I ordered “The Kingsway” ($13) with double beef, double cheese, lettuce tomato, ketchup & secret sauce. I omitted the caramelised onions & request a small serve of chips to accompany my burger. The patties weigh about 120 or 130 grams each so a double patty ensures a nice meat to bun ratio. Despite my original hesitation, I’m glad I made the effort to drive out there as the burger was really solid & better than many I’ve sampled in recent times. Invite or otherwise, I’d happily recommend giving this joint a try if you love a good burger. They were totally packed when I visited around 6pm midweek, so clearly the locals are already on board. One Response to “Burgers in the Burbs”