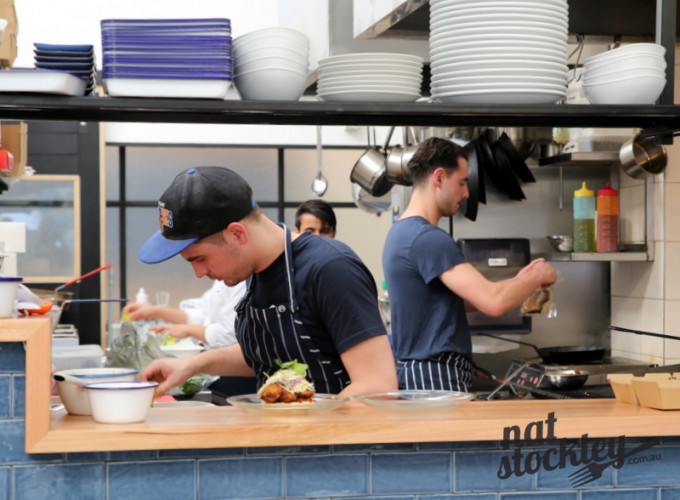 Dexter – Meat & Buns
456 High St, Preston VIC 3072
Ph: 03 9973 3577
Dexter is the collaboration of three guys with considerable hospitality experience and a big dream. In the kitchen you’ll find Adam Goldblatt and Tom Peasnall mingling with the meat, whilst Tom’s brother Sam looks after front of house having previously undertaken a similar role at Abbotsford café Three Bags Full.
The boys in the kitchen spent time in London, including a stint at BBQ joint Pit Cue Co which no doubt would have provided valuable experience. The approach at Dexter sees old-style American BBQ techniques united with modern methods such as sous vide. Similarly, you’re likely to find kimchi or Sriracha sauce mingling with your slow & low cooked meat. It may not be traditional American BBQ, but I rather like the concept.

Preston may seem like an unlikely location for such a venture, but there seems to be more quality venues opening over this way, including recent addition Stray Neighbour from the team behind Chew Burgers. I envisage visiting Preston and nearby suburbs Thornbury and Northcote more frequently in the future as there are lots of interesting new bars & eateries springing up in the area. At lunch time the menu focuses solely on brioche buns with various fillings including pulled pork, brisket and fried chicken. There’s a vegetarian option that includes a corn fritter & green fried tomato.
Come dinner time the menu expands to include a selection of meat trays. The options may include a beef short rib or rump cap or perhaps the Kurobuta Berkshire pork loin which was one of the specials when I visited. Rumour has it the hot meat donuts are proving to be a popular starter and there’s also KFC (Kentucky Fried Cauliflower) on offer. I couldn’t go past the pigs head bun which isn’t as grisly as you may be picturing. Essentially all the meat from the pig’s head is picked away, formed into a patty, crumbed and deep fried. It’s somewhat similar to the pig’s head bao which has featured on the menu at Andrew McConnell’s Supernormal.
Accompanying my crumbed nugget of porky goodness is pickled pineapple, pickles and hot sauce.  Whilst the fries may be the commercial variety, they arrive greaseless and with just the right amount of BBQ rub seasoning.

In the drinks department, the plan is to have a rotating roster of local breweries on tap, but there’s also a selection of craft beers by the bottle together with cocktails and a brief wine list. Locals will no doubt be pleased to learn that Dexter is geared up for take away as evident by the sizeable wall menu mounted above the front counter. I certainly enjoyed my Pigs Head Bun and plan a return visit at dinner time to explore more of the meaty menu.

One Response to “Dexter On Point”